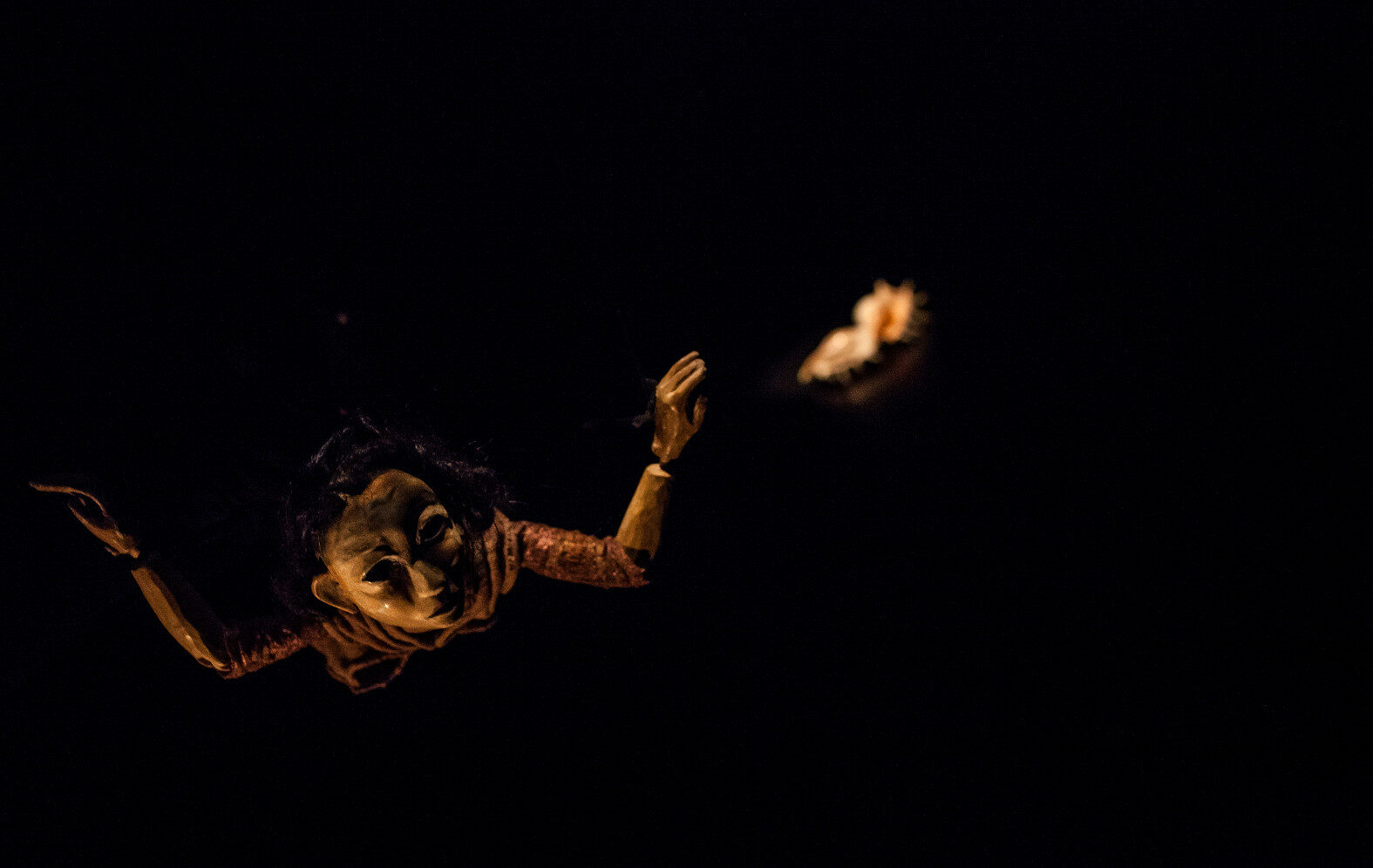 This text wants to offer a perspective on the idea that puppets play a role of catalysts for humans’ nature and interpretation of the surroundings. Regardless the artefact nature of puppets, these appear believable and relatable in the eyes of the spectators, establishing with them an empathetic bond built on the striking resemblance with how we humans see ourselves, other people and living beings, and in general the world around us.

Among all the macro themes surrounding the field of performing arts and theatre, the one that I’m possibly the most obsessed with and that I consider being a constant source of stimulation to research and elaborate in the realm of puppetry is the concept of illusion of life in puppet theatre.

We usually give the word “illusion” a negative connotation, thinking of something not real,  that lies about its true nature, but when speaking of puppetry this word acquires a meaning that verges on the idea of magic, something so charming that cannot be real.

The association of puppetry with magic is rooted in the spiritual and ritualistic dimension of our ancestral societies, where the puppets were paraphernalia used to perform ceremonial acts in which they would embody metaphysical or abstract elements such as spirits, deities and abstract entities, even animals or humans.

In this context it is important to underline the correlation between puppets and toys, where these last one represent for children the personification of either characters that they admire or are projection of what they would like to be. This association finds its meaning in the idea that the human nature contemplate the control over the surroundings and all other living beings: as it is important for the kids’ cognitive development to learn through playing with toys about themselves and social dynamics.

In the spiritual sphere our adult ancestors tried to exercise control or influence on the domain of supernatural and divine by representing with puppets their understanding of that unknown dimension. As if recreating these abstraction in small scale would help reaching a higher level of understanding.

If this is the explanatory theory of how puppets have always been connected to not just the theatre art as we associate them today, but also higher spheres of spirituality and philosophy, how does the illusion of life manifest itself in puppetry? So, from the merely pragmatic perspective, we can easily state that puppets are objects which are animated in real time by a human who transfers kinetic energy, intentions, emotions, and sometimes voice into them, in order to create the illusion that the puppet live and moves with its own will.  But granted the how this happens, what is the deeper reason why we do not just talk about illusion of movement, instead of talking about life?

Let’s start from the presumption that life constitutes by a number of things such as the actions we make, memories, emotions, traumas, and relationships that we experience during our existence. In this sense we can assume that talking about illusion of life has to do with a more complex interpretation of what life is, as a network of interconnected abstract and tangible elements that constitute the existence of a sentient being.

Regardless of the exterior appearance, be it anthropomorphic, with animalistic features, or a common object like a cup or a piece of cloth, a puppet is always the representation of something that exists in our reality either concretely or abstractly, to which we can relate on an emotional level.

When we watch puppet theatre we virtually agree to buy the illusion that the puppets are indeed alive and acting as living characters on stage because their actions and presence on stage is an imitation of our lives. The reason why this happens it is because puppets communicate in a more subtle language made of metaphors, symbols, and simple gestures compared to human performers, and their physical appearance and naivety makes us associate them with our inner child and to a more spontaneous and genuine idea of ourselves and others.

This creates a mental space where the viewers can find a deeper and more intimate connection with the puppets, enabled paradoxically by the fact that being an object it is less relatable on a biological basis compared to a performer in flesh and bones: the puppet is perceived as something that can take it all, do whatever and get away with anything. Since they act like us, we feel subconsciously like they are being more genuine and true to the human nature, which are constricted by social norms, ideologies and dynamics.

Creating the illusion of life is the most noble element in puppet theatre, not only for the beautiful craft and art of recreating movement, the illusion of magic tricks and the offer of imagery of fantasy, but because of the crude realism that is able to convey anytime we see puppets being so relatable.

When they yawn, when they’re heartbroken, when they gain courage, when they find happiness, puppets show us a bit of ourselves, as if we were watching ourselves in a mirror, from enough distance to look at ourselves objectively, critically and honestly, having a genuine opportunity to learn something from ourselves and all that is around us, as with the eyes of a child learning about the world again for the first time.

The journey towards the shortfilm TangO