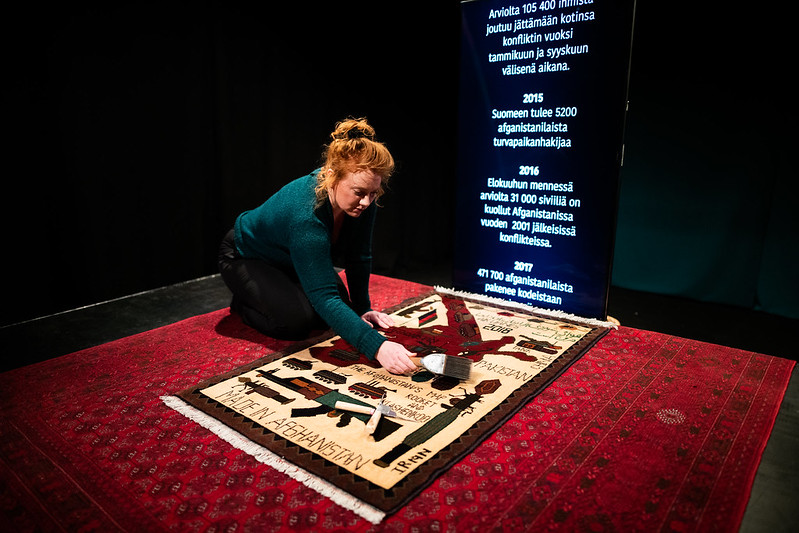 I chose to go see this performance since it discusses a topic that has now been around for nearly 20 years and so far, living in the centre of Europe in a westernized world, the perspectives I have witnessed cannot be seen as depicting the whole palette. This performance therefore promised to look beyond the western perspective, something definitely needed to gain a glance at the full picture.

Afghanistan cannot be talked about without mentioning the United States of America. It was clearly shown through an interview with an Afghan woman and a voice recording of one of the current US-president’s statements just how imbalanced the relationship between the two countries is and just how dependent Afghanistan is pictured. The US see themselves as the much needed supporter, nothing would work without them, which totally neglects Afghanistan’s history before the US stepped into the picture as well as what damage has been caused since they did.

In a following scene with an American woman selling a rug depicting Afghanistan on a map surrounded by the weapons involved in the conflict as if it were the most normal thing in the world showed me just how connected the US is to Afghanistan and at the same time how emotionally uninvolved it gets when speaking of Afghanistan, especially making the whole scene sound like a huge sell-out.

Another example for how distant the US-Afghan-relationship empathy-wise is shown when
speaking of the women-rights-movement. In the shoes of an American feminist, the actress doing the performance shows how quickly feminism can meet its borders. With “all the money” Afghanistan received from the US, it at some point in near future simply had to be enough to stand on one’s own feet, just like she is doing now, since she already fought her battle and it cannot be so difficult for the women in Afghanistan to now do the same. That this neglects the different circumstances of the movements entirely is not thematized by this so-called feminist at all.

What the main problem is in the end, which stood out in multiple interview clips with one Afghan woman, is that it is talked about ‘me’ and ‘you’, ‘my problems’ and ‘your problems’ when we should stop separating and start talking about our problems as a global community.